Sometimes it is hard to understand why men do the things they do.  In the case of the Dewey-Berry feud, I am reminded of an old English proverb: “He that seeks trouble always finds it.”

The violent showdown between Chancy Dewey and the Berry family happened June 3, 1903.  The shootout occurred in the southeast section of Cheyenne County, Kansas.  It is sometimes labeled, “The last wild west shootout between ranchers and settlers.” 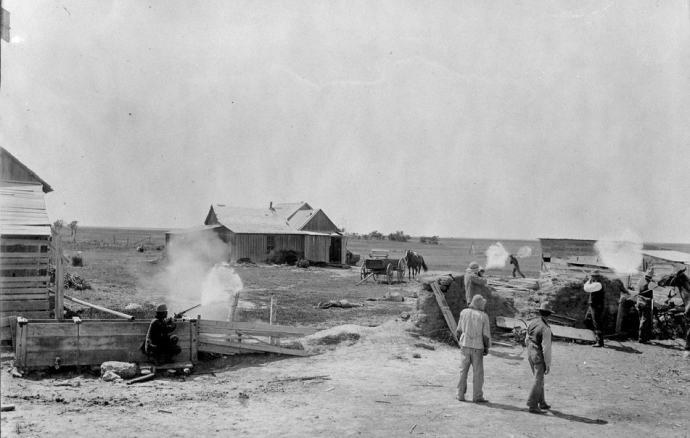 These two pictures of the Alpheaus Berry homestead are reenactment pictures taken a few days after the fight, by an entrepreneur. They have value to us in that we can see the harshness of the land and the hard times the Berrys were experiencing. The tip of the wind vane of the wind mill can be seen in the top left corner of the photo, and the water pipe from the windmill can be seen running into a makeshift trough where the former water tank was.

This photo shows men down and a horse depicting Dewey’s dead horse. The horse’s left foot and leg are pulled forward and its head and forelegs tied down to that leg. That is how they got him to lay still.

My parents’ families arrived in Cheyenne County about 1915-1920.  The story of the Dewey-Berry Fight was still being told locally.  I cannot remember when I first heard it.  I have been in that section of the county along Beaver Creek when I was very young.  I don’t remember visiting the exact location of the Alpheaus Berry homestead.  A Google fly-over indicates a modern dry-land farming operation there today.

By the 1880’s the Native Americans had been pushed onto reservations, and the buffalo were almost just a memory.  The vast expanse of fertile Western Kansas land first attracted the cattle ranchers and cattle trail drivers. The trail drivers route called The Western Trail entered Cheyenne County from the south. The trail proceeded north through the county and on to Ogallala, Nebraska.

The area was opened to homesteaders in 1885.  Cheyenne County applied for county status in 1886.  The vast flatland plains and rolling hills grew the short, thick, but nutritious, high protein, Buffalo grass.  The river and creek bottoms grew the taller Blue-stem grasses.

The settlers in that area were of a diverse origin: English, Scotch, Irish, French, Swiss, German, and German/Russian.  The large group of German/Russian ethnicity were mostly from the Ukraine.  They no doubt recognized wheat land when they saw it.  The settlers were hard working, devout, and determined to succeed.  They probably did not know how capricious the High Plains weather could be!

The earlier cattlemen took advantage of the vast open range to pasture cattle brought north from Texas.  The inevitable clash between cattle baron and settler was bound to happen in Western Kansas.

The Berry family had migrated from the eastern states to settle in Rawlins, Cheyenne and neighboring counties in the mid 1880’s.  I do not know the year exactly.  I do know that Cheyenne County was established in 1886.  The Alpheaus Berry farm was located in the southeast area of Cheyenne County.  Alpheaus’s farm was surrounded on all sides by land owned by the Dewey’s Oak Ranch.

The Dewey’s Oak Ranch headquarters was located near Atwood in Rawlins County.  The Dewey family roots were in Cadiz, Ohio and Chicago, Illinois.  The father, C.P. Dewey, was a lawyer and wealthy industrialist in Cadiz.  At the time it was a common thing to see rich Easterners dabbling in the ranching business.  The Dewey operation bought up homestead land at every opportunity.  The wealthy brother of John A. Rockefeller was attempting to develop a large ranch in the the same general area as the Deweys.  At the same time C. P. and his son Chauncey Dewey were fighting the homesteaders, they were fighting with the Rockefellers in and out of court.  Dewey sent heavily armed men to cut the Rockefeller fences as soon as they put them up.

In 1899, C. P. Dewey sent his 22-year-old son Chauncey to run the Oak Ranch.  The Chicago and European educated Chauncey immediately proclaimed that they intended to own all the land between Atwood, Kansas and the Colorado line.  That would have been a concern for the residents of Sherman and Cheyenne Counties.

The Berry family had suffered the ravages of drought, winter blizzards, and crop damage by Oak Ranch cattle.  The Berry boys had a reputation of being tough and surly.  They went armed, and were known to have thrown a few rifle shots over the heads of Oak Ranch cowboys that got a little too close to the homestead.

Young Chauncey promptly issued new double-action Colt revolvers to his cowboys.  They were instructed to carry both the revolvers and repeating rifles.

Chauncey Dewey purchased and issued to his cowhands Colt double-action revolvers such as this one. The revolver was made in two calibers. The .41 caliber was called “The Thunderer” and the .38 caliber was called, “The Lightning.” Dewey issued the .41 cal. to his employees and he carried a .38 cal. The revolver pictured here is a .38 cal. Lightening. Dewey was an expert with his Lightning.

The quarreling continued over land rights, cut fences, and damaged crops. Apparently the Berrys planted a crop on some Dewey land and the Oak Ranch won a property rights suit against the Berrys.  The court awarded a settlement to the Oak Ranch.  The Sheriff was instructed to proceed with attachment.  The May 14, 1903 issue of the Cheyenne County Rustler newspaper carried a Sheriff’s Notice announcing that Sheriff McCulloch would hold a public auction at the Alpheaus Berry farm at 2 p.m. on June 2.  One 12 ft. Goodhue windmill and one 15 barrel wood stock tank would be sold to the highest bidder.

I have wondered why the windmill and tank were chosen as the auction items.  They may have been the only thing free of debt.  The windmill and water tank would of course, be critical items to the homestead.  The Berrys were suffering from a drought and crop failure.  The loss of that equipment was probably the last straw.

Chauncey Dewey sent two of his trusted cowboys to purchase the items. When those two men and another Oak Ranch employee showed up early at the Berry farm they were promptly ordered off at gunpoint.  They waited in the road until Sheriff McCulloch arrived.

The Oak Ranch hands bought the water tank for five dollars.  They were authorized to pay up to ten dollars for the windmill, but Alpheaus Berry’s cousin, Roy Berry, bid $10.25 and saved the windmill.  When the cowboys said they would pick up the large 15 barrel capacity tank the next day, they were told they had better “send a big enough man to take care of himself.”

Chauncey Dewey was not about to let anybody intimidate him.  An expert with revolver and rifle himself, Dewey chose to bring Clyde Wilson, William McBride, and seven more men for a total of ten armed men.  The group included two teamsters driving mule teams pulling large lumber wagons.  A 15 barrel wood tank would be a bulky item to load and haul, but it would not have required ten men.  Wilson and McBride were both military veterans.  Wilson had seen extensive action during the Philippine insurrection.  Dewey came prepared for trouble.

When the Dewey crew arrived, Daniel P. Berry, the father, was working in a nearby field.  As the Dewey crew started to load the tank, Daniel went to the location.  The two sons, Alpheaus and Burch, rushed to the farmyard also.  Cousin Roy Berry later testified they all came in to help load the tank.  Gunfire erupted and when it was over D. P. Berry, Alpheaus Berry, and Burch Berry were dead.  Another son, Beach Berry, had a leg wound and the cousin Roy was shot in the face.  Both men later recovered from their wounds.  Not a Dewey man was hit.  Chauncey Dewey’s horse was killed by a stray bullet.  All Dewey men took refuge behind a sod wall near the cattle pens.

A report obtained from the files of the Sherman County Historical Society in Goodland, Kansas notes that McBride ran out from the wall, knocked D. P. Berry down, and shot him twice with his Colt revolver.  The wounded Roy took a bullet to the face, shattering his jaw, and the second bullet knocked off his hat.  Having been caught out in the open, Roy survived the rest of the gunfight by playing dead.  Beach ran from the cover of the corn crib to the farmhouse.  He later claimed that the Dewey crew fired six shots at him as he ran.

Beach Berry went to the town of McDonald and telephoned for the Coroner and Sheriff.  Sheriff McCulloch following the Coroner’s findings charged Chauncey Dewey, William J. McBride, and Clyde Wilson with murder.  He placed them in jail at St. Francis, two days later.

As the Berry family prepared to bury their dead at nearby Bird City, public sentiment against Dewey and his two employees grew to a fever pitch.  Fearing for the lives of the prisoners, the Governor of Kansas activated a Guard Unit and sent them to St. Francis.

Dewey, McBride, and Wilson were bound over to District Court.  Sheriff McCulloch delivered the three men to Goodland to be placed on the train to Topeka.  The Guard Unit escort marched the thirty some miles while the Sheriff rode his horse.  The three prisoners rode in a wagon.  It took the procession two days to reach Goodland.  The prisoners were then taken by train to Topeka and housed at the Shawnee County Jail.

The prisoners made bail and went into seclusion.  After much legal wrangling, the trial for murder was held at Norton in Norton County in early 1904.  The main question was, “Who started shooting first?”  The Dewey defense was, “Shoot or be shot.”  The legal wrangling went on for weeks.  Finally after a long deliberation the jury came back with a “Not Guilty” verdict.

A civil suit brought against Chauncey Dewey by Roy Berry and the widow of Daniel Berry went on for fifteen years.  The Berrys were awarded a small sum.  Dewey promptly contested and legal wrangling went on for many more years.  No one seems to know if the Berrys ever collected.

In their waning years, Roy and Beach Berry admitted that the Berrys had started the shootout that fateful day.  Chauncey Dewey heard of the admission and contacted Roy.  He asked if they would sign a statement to the fact that the Berrys had shot first.  Berry agreed and Dewey traveled to Berry’s Colorado home. The statement of admission was signed and affirmed.  Berry and Dewey shook hands and the Dewey-Berry feud was finally over.  Dewey is quoted as saying later that it might  not have ever happened if they all had been a little older and more mature.

Chauncey Dewey lived long enough to see the large concrete grain silos rise above the prairie. I took this picture of a large truck emptying a load of grain at the St. Francis, Kansas grain facility in 1958 – one year before Dewey passed away.

More facts about the Dewey-Berry Gunfight: 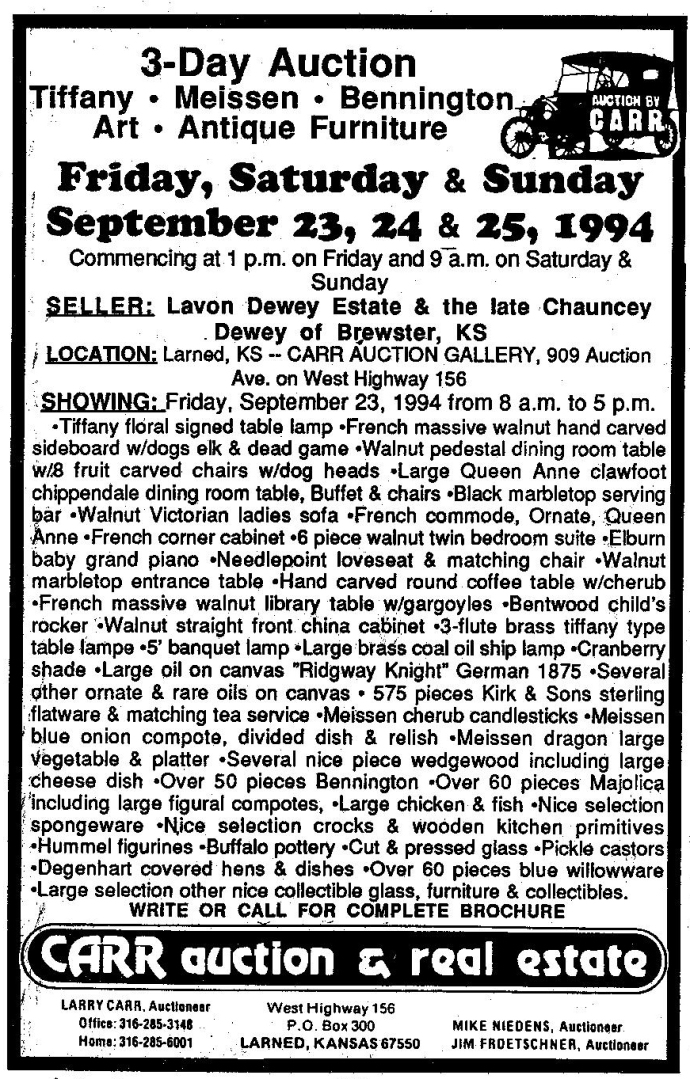 6 thoughts on “The Dewey-Berry Gun Battle In Cheyenne County, Kansas”