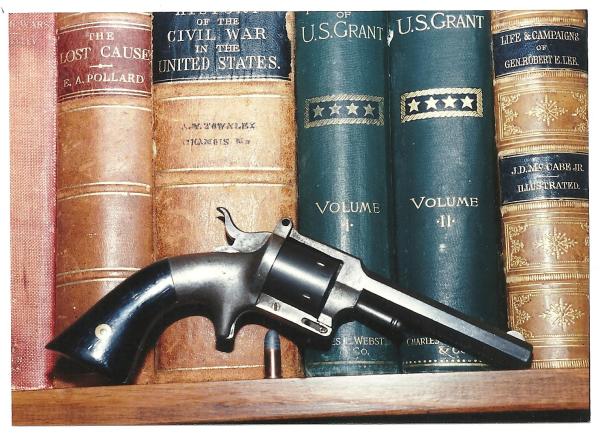 Manufactured by Lucius W. Pond – Worcester, Massachusetts.  This is a single action belt or pocket revolver made from 1861 to 1870.  It is a .32 caliber, six shot, rim fire cartridge gun.  Pond infringed on a patent owned by Smith and Wesson and lost a lawsuit over it.  He was forced to stamp on the barrels of the remaining inventory of pistols: “Manufactured for Smith and Wesson pat’s April 5, 1855.”  This gun is so marked.

One of the desperadoes in my latest book, The Shenandoah Sharpshooter, carried a hidden gun like this one.  On page 162, the criminal Canter goes for his hidden Pond revolver. In an instant Purcell meets the challenge. To read the exciting action surrounding this incident and others, order your copy today.

Set in the Civil war, this hero’s journey follows young Stephen Purcell as he takes to the Blue Ridge mountains to avoid the men who took away his entire life.  Armed only with a good horse under him and a will to live, Purcell is tried and tested many times as he heads towards the western frontier.  Action, mystery, romance, and surprising turns guide him to his final destination.

Available on Kindle and paperback here: The Shenandoah Sharpshooter

Read the first chapter in its entirety here: The First Chapter of the Shenandoah Sharpshooter.