Sundown Trail salutes our fallen veterans on this Memorial Day

The Mystery of the Lone Civil War Grave

In April of 1973, I was driving down a dirt road near Grassy, Missouri, headed back to Highway 34 in Bollinger County.  Black River Electric Cooperative, my employer, had a branch office in nearby Marble Hill.  The day was coming to an end and I was anxious to check in with that office and head back home.  I can’t remember exactly what I was doing there.  I am sure it was in response to a cooperative member’s request for help with an electrical problem or a billing complaint.

A few hundred yards short of the highway, I glanced over at a scrub timber area to my left.  A lone white stone marker among the trees caught my attention.  It was strange and almost spooky. I stopped, grabbed my ever-present camera and walked out into the woods.  The inscription was brief and to the point with no dates.  It read: “W. Wood Union Soldier Died for his Country.” 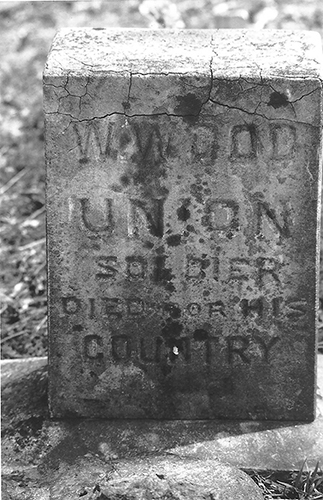 Later as I worked in the area I quizzed locals about the grave.  No one seemed to know much about it.  The story that I eventually heard was that a group of soldiers escorting a wagon with a wounded soldier laying on a bed of straw approached a nearby farm and requested some fresh milk for the wounded man.  The farmer caught up a milk cow and extracted some milk for the soldier.  He raised up to a sitting position to drink the milk and died a short time later.  They buried his body just off the road.  For decades only a large rock marked his grave.

The grave was still unmarked as a nearby farm family left on a trip to town.  As they passed by when they returned that evening they noticed a new white marker was there.  Who placed it there?  That remains a mystery to this day. 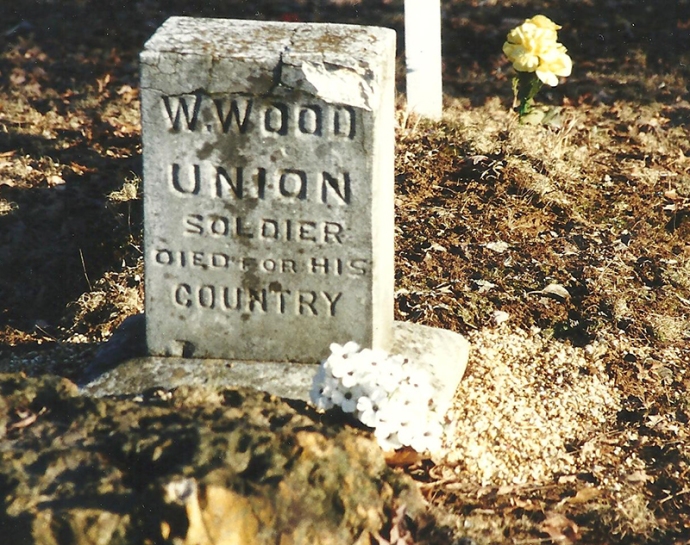 Photo taken at later time shows someone had decorated grave.

W. Wood was one of nearly six hundred thousand young men that lost their lives in a war with ourselves.  Let us solemnly remember the sacrifices of both Union and Confederate forces this Memorial Day.

Sundown Trail extends our thanks to Jeanie Layton of the Bollinger County Library at Marble Hill, for additional information.

Interesting facts about the area: