In this Army someone must always be in charge

In the spring of l963 I was in basic unit training at Camp Polk, Louisiana.

At a company formation the First Sergeant counted off twenty men to serve on a work detail at battalion headquarters.  Dismissing the rest of the company he looked around for cadre to march the detail to our work area.  There wasn’t even a PFC in sight.

“Ryan, fall out and march this detail to battalion headquarters.  Report to the Company Commander.  He is already over there.  And Ryan, you keep them looking sharp, no horse play, the Colonel is with the C.O.”  The message was clear.

I stepped out, called, “Attent hut.  Right face.  Forward march.”  Down the road we went.

“Hut, two, three, four.  Dress it up look alive, get in step.  Hut two, three, four.”  As we neared our destination I spied the company commander, a cocky young First Lieutenant, and the battalion commander- a grizzled old Lieutenant Colonel, standing on the sidewalk.

“Column..halt, left..face.  Detail..at ease.”  They looked sharp.  With my fatigue jacket buttons ready to pop, I stepped around the detail, approached the officers and snapped a crisp salute on the Lieutenant.  “Detail reporting for duty sir.”

The Lieutenant returned the salute, and adjusted his swagger stick under his arm.  “How many men are there?”

Without thinking, I replied “Nineteen men and myself Sir.”  A smirk appeared around the corners of the Lieutenant’s mouth.

“Private Ryan, I asked how many men are there in this detail?”

Color welled up from the collar of my thoroughly deflated fatigue jacket.  I blurted out, “Sorry sir, twenty men sir.”

The Colonel stepped forward and caught my eye.  In a voice that only the Lieutenant and I could hear, he said.  “That’s all right, Ryan.  In this army someone must always be in charge.” 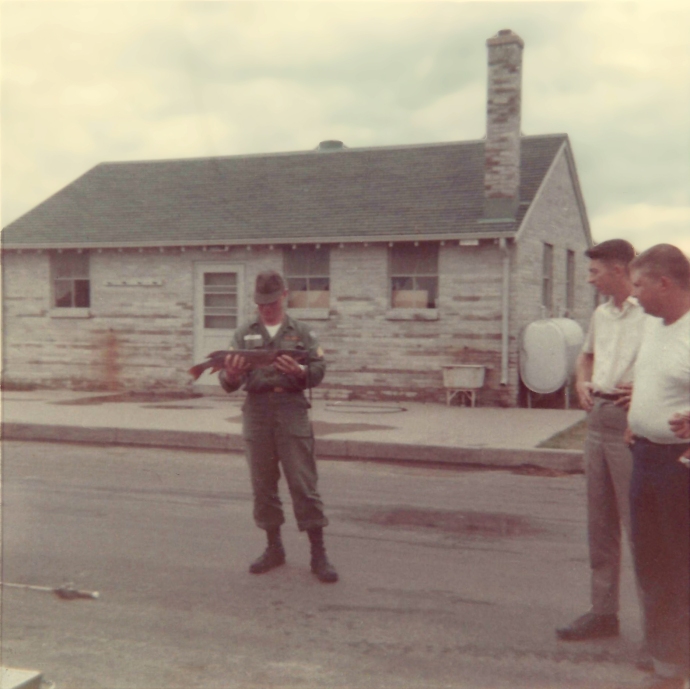 I lived up to the Old Colonel’s expectations and made Sergeant a few years later.
Here I am with my first Northern Pike, caught while on weekend leave at Camp Ripley, Minnesota.